You may have more control over aging than you think, say ‘The Telomere Effect’ authors 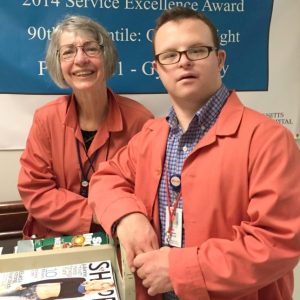 My sister, Kristin, and I grew up splashing together in swimming pools, delighting in ice cream cones, and singing along to movie musicals. We were very much alike, with what we saw as a small difference: She was born with Down syndrome and I wasn’t.

We’ve grown together into the people we are today, learning from each other and supporting one another. Kristin has become the checks and balances of my personal and professional lives. Whenever I am frustrated or tired by life’s hassles, Kristin’s can-do spirit reminds me that my struggles will not only be OK, but they will be worth it.

Kristin, now age 36, has inspired my life’s work — caring for individuals born with Down syndrome, working with their families, and furthering our community’s understanding of this genetic condition.

That understanding begins with better knowing the size of the Down syndrome population. Nearly every book, webpage, and research article about Down syndrome starts with information about the number of people living with it. But those estimates have been quite inaccurate.

Working with Gert de Graaf of the Dutch Down Syndrome Foundation and Frank Buckley of Down Syndrome Education International/USA, we stitched together expansive databases spanning six decades to create what we believe are more accurate estimates of the number of people living with Down syndrome.

Previous work by others estimated that 250,700 people with Down syndrome were living in the United States as of 2008. Our estimate, published earlier this year in the journal Genetics in Medicine, was considerably lower: 206,366 people living with Down syndrome as of 2010. That included individuals born outside the US but now living here. We used a more precise accounting for selective abortions and for long-term survival rates for children born with Down syndrome, which both influence the size of the population.

Babies born today with Down syndrome and their families can expect a lifetime of possibilities and potentials. The life expectancy for people with Down syndrome continues to rise — the median lifespan is now 58 years. Heart conditions, which can accompany Down syndrome, have been routinely and easily corrected by surgery since the early 1980s. Medications can solve co-occurring thyroid problems, and sleep apnea can be stamped out with good surveillance and treatment options.

These and other advances in caring for individuals with Down syndrome make it possible for people like Ben Majewski to lead thriving and healthy lives.

Ben is a well-known fixture for his role as a resource specialist in the Mass General Down Syndrome Program, which I co-direct. In between greeting and escorting patients from the waiting room to the exam room and monitoring the daily clinic schedule, Ben shares his experience as an individual with Down syndrome. Celiac disease is a common concern among patients and their parents, according to Ben, who is armed with his own background in managing that condition and an iPad full of reference material and presentations that he developed.

At 26, Ben has a lifetime of personal knowledge to share. But he’s also a snapshot into the future for families. In addition to his work at Mass General, Ben is also employed through the Boston Red Sox and by an Irish restaurant in Newton, Mass. He’s spoken in front of the United Nations on Down Syndrome Day. He lives independently from his family and dreams of getting married someday. In essence, he’s like anyone else.

But Ben knows there are challenges ahead, just as I know from my clinical experience that not all people with Down syndrome are alike. Adults with Down syndrome often develop medical conditions like obstructive sleep apnea and Alzheimer’s disease. Some can live independently, others need more assistance. Programs like ours provide multidisciplinary approaches to these medical and psychosocial issues to help our patients maximize their life potential. Culturally appropriate guidance is also essential to help individuals with Down syndrome with everything from feeding techniques to step-by-step transition planning and the challenges of safely riding a public transit system as confusing as Boston’s.

Brian G. Skotko, MD, is co-director of the Mass General Down Syndrome Program and assistant professor of pediatrics at Harvard Medical School.

Disclosures: Dr. Skotko occasionally consults on the topic of Down syndrome through the Gerson Lehrman Group. He receives remuneration from Down syndrome nonprofit organizations for speaking engagements and associated travel expenses. Skotko receives annual royalties from Woodbine House Inc. for the publication of his book, “Fasten Your Seatbelt: A Crash Course on Down Syndrome for Brothers and Sisters.” Within the past two years, he has received research funding from F. Hoffmann-La Roche Inc. and Transition Therapeutics to conduct clinical trials on study drugs for people with Down syndrome. Skotko is occasionally asked to serve as an expert witness for legal cases in which Down syndrome is discussed. He serves in a non-paid capacity on the Honorary Board of Directors for the Massachusetts Down Syndrome Congress, the Board of Directors for the Band of Angels Foundation, and the Professional Advisory Committee for the National Center for Prenatal and Postnatal Down Syndrome Resources.